For the longest time, I’ve been going through an ugly case of Writer’s Block. Why? I have no idea. It’s not that I’ve run out of things to say. I seldom do. I have a bunch of unfinished drafts sitting here, so why can’t I just write?

But the thing is… If I have to write about some of the places I visited but still haven’t written about, it’s a little hard because I’m only left with the ones that totally underwhelmed me. The really good ones (like, say, Wroclaw) are done, and so are the negative experiences (like why I didn’t travel solo in Italy).

And then there was Munich.

Munich leaves me feeling confused every time I think about it. It was the city with which I started my first ever long solo trip. 5 weeks long. So, yup, pretty special. But, at the same time, it isn’t the most interesting city I’ve been to either. I’m not saying I didn’t like it, I did, but I can’t say I loved it either.

But anyway, Munich needs to be talked about, so here’s some of the things that stand out in my memory, in no particular order… Some are about the city, and some are about me 😉 Enjoy!

Okay, to begin with… Munich is the capital of the state of Bavaria in Germany. They have a lot of state-pride, I learnt. With some people it almost seemed that they were perfectly happy with believing that Bavaria is a separate country and Munich is its capital.

This was where I came out of the metro because this is the city’s central square. The city’s pedestrian zone is bounded by this on one end and Karlsplatz on the other. This whole area is bustling with people, with shops and churches and lots of places to eat (and tons of tourists like me 😉 ). The Rathaus-Glockenspiel is an attraction where 32 near life-size ‘characters’ perform on the Old Town Hall which overlooks the square, that takes place 3 times everyday.

Yes, I did indeed have to take a picture with my foot in the frame for comparison 😉

One of my favourite things in Munich was this story. When the Frauenkirche (Church of Our Dear Lady) was being built, the Devil came and, in exchange for funds, made a deal with the builder not to include any windows (I have no idea why). The builder was smart and constructed it in such a way that the view of the window from the entrance was obstructed by pillars. When the Devil got to know this, He got furious and stomped his foot on the ground, leaving his footprint there.

AKA Disney’s Sleeping Beauty Castle AKA The Castle That Made My Disney Dream Come Tue. You can read more about that here.

Monika and I, with Olympiapark behind us

Munich is where I couchsurfed for the first time. When I was still looking for hosts, I found that this city has a huge and very active CS community. Since I was staying 4 nights, I split them between two hosts. I got numerous invites and acceptances, and I picked the two I liked best. And, believe it or not, there were other surfers in both the hosts’ places.

(Milan to) Munich was also my first long carpool experience. I had no idea what I was getting into, because I obviously didn’t know who the other passengers would be, I found myself stuffed into a car with 5 others for an over 6-hour long journey, which turned out to be surprisingly fun. Other than the times that I was sleeping, the other girls and I chatted all the way there. (It’s inexplicably relieving when you discover that your co-passengers are 2 girls your age and one of their moms and not… I don’t know… Creepy people 😛 ).

German bread awed me. All this love for French bread never quite made sense to me because, quite frankly, I never found it interesting. But the dark, hearty German bread with nuts and seeds… Get in my mouth, you!

Beer drinkers, rejoice!! (Un)Fortunately, I’m not one of you. Beer gardens in Germany basically started because beer was only allowed to be produced during certain months of the year, basically the cooler months because the beer brewing process needs cooler temperatures for fermentation, and also releases a lot of heat which could cause fires in the summer. Since no beer was produced in the summer, cellars were dug up to store beer for the hot months. Chestnut trees were planted over these cellars to provide a cool shade. Eventually, these cellars were used not just to store, but also serve beer, and thus, beer gardens were born. You can bring your own food and buy beer here and have a nice picnic. In the picture… My apple drink 😛 , a freshly baked pretzel and potato salad that me and my host prepared together!! FUN!!!! 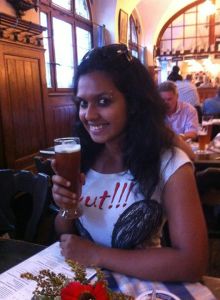 Non-alcoholic wheat beer. I was peer-pressured into drinking it.

The Most Expensive Watch on Display 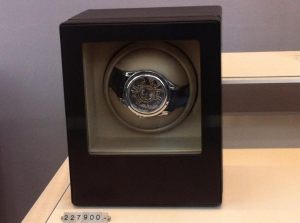 Just off the main square, away from the main pedestrian route is the local market. Earlier on Marienplatz itself, it was moved outside because it started getting too big. I had some pretty awesome snacks while I was there (mmm, meaty stuff!). But I did discover (and this was confirmed by the walking tour guide as well) that this is not a cheap farmer’s market. It’s perfectly pricey, so don’t go there for your I’m-going-to-cook-in-the-hostel shopping 😛

I told you I like these things 😛 Whenever I see a sign of India anywhere abroad I just go like wheeeeeeeeeeee!!! There was some festival going on when I visited, and my host took me there the first night I stayed with her. And this sign was one of the first things I saw. (Sometimes I feel I get way too excited for my own good 😉 )

Wrapping up… Some can argue that the Holocaust actually began in Munich. It was here that the first Nazis assembled and met and started coming up with their plans. The first concentration camp was opened just 15 minutes away from Munich, in Dachau. I don’t want to get into this too deeply, but for anyone who’s interested, I found an interesting blog about this. When Munich was getting bombed during WWII, people actually stood outside their homes and sketched them so they could come back and rebuild them just the same.

And for the last time (the voting closes tomorrow)… Please vote for me in the Big Blog Exchange by clicking here and entering your email ID for verification. I will really really appreciate it!! Thank youu!! ❤

Talk to me! :) Cancel reply

There was an error retrieving images from Instagram. An attempt will be remade in a few minutes.